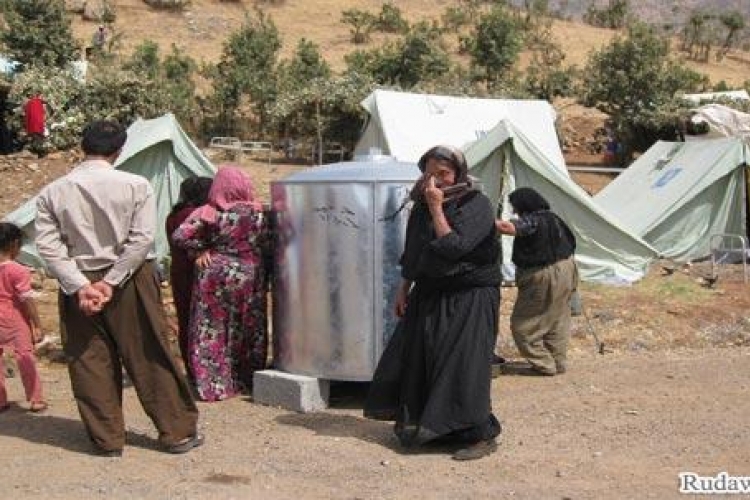 Dayilystar.com: Over 200 Iraqi Kurdish families have been forced from their homes by weeks of Iranian shelling of rebel bases in northern Iraq, local officials and an NGO said Tuesday. The shelling has targeted camps of the separatist Party of Free Life of Kurdistan (PJAK) since mid-July, and the two sides have engaged in on-off clashes along the Iraq-Iran border.

The International Organization for Migration has warned that the displaced “will not be able to survive long without aid.”

“The Iranian shelling is continuing, but is not constant,” said Abdel-Wahad Qawani, the mayor of Choman district in Iraq’s autonomous Kurdish region, close to the Iranian frontier.

“Around 230 families have so far left their villages at the border to head for safety … We have built a camp for refugees and asked international organizations to provide us with tents and basic requirements for those who left their homes and possessions.”

IOM spokesman Bertram Chambers told AFP that his organization had tracked 203 families who registered with local authorities and was providing them with basic supplies along with the U.N. refugee agency.

“These families will not be able to survive long without aid, as almost all left their livelihoods behind,” Chambers said in an email. “Many abandoned their crops and, importantly, their livestock, which will undoubtedly shorten the amount of time they can survive unaided.”

The speaker of the Iraqi parliament, Osama al-Nujaifi, meanwhile “stressed the importance of the immediate cessation of Iranian shelling of Iraqi territory, which is considered a violation of Iraq’s sovereignty.”

Nujaifi, who made the remarks during a meeting Tuesday with U.S. Ambassador James Jeffrey, also said that a parliamentary committee will investigate the issue, his office said.

At least three Iraqi Kurds, including a 10-year-old boy, have died as a result of the Iranian shelling of PJAK bases, and the Kurdish regional government issued a statement on Monday calling on both sides to cease attacks.

Last month, Iraqi Foreign Minister Hoshyar Zebari demanded Iran stop the shelling, which has been ongoing since July 16, saying it was damaging ties between the two neighbors.

But state-run media in Tehran reported that Iran would continue the operation until Iraq deployed forces along the frontier to prevent cross-border attacks by PJAK rebels.