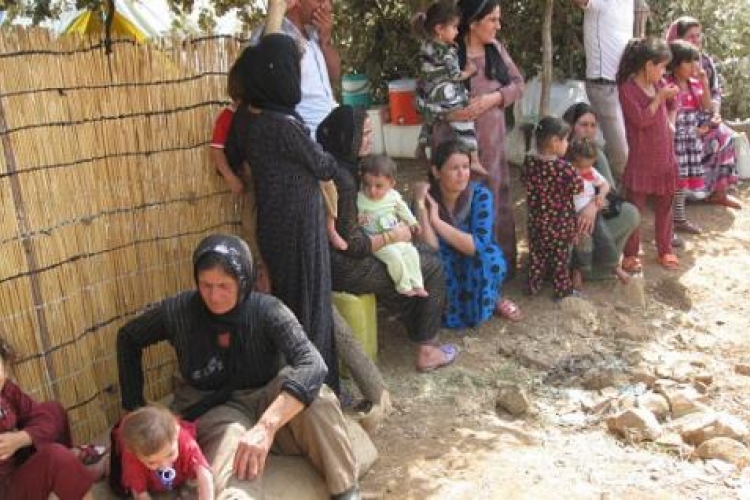 Kurdistan has deployed 12,000 forces to an area along the Iran-Iraq border as ongoing fighting between Kurdish rebels and the Iranian military has killed civilians and raised concerns that Iranian troops are crossing into Iraqi territory.
Salah Dilmani, a high-ranking Peshmarga officer, told Rudaw that the Kurdistan Region has sent around 12,000 Peshmargas or Kurdish military forces, to the Pishdar border district where Iranian forces have reportedly launched ground attacks on the rebel fighters of the Party of Free Life of Kurdistan (PJAK) over the past two weeks.
“We will confront any forces that may attempt to cross the borders of Kurdistan,” Dilmani said.
Ahmed Qadir, the mayor of the nearby Sidakan district told Rudaw that on Saturday two shepherds, Herish Karim, 20, and Shekho Hassan Mustafa, 44, were killed during the latest Iranian bombardment. Qadir said the men had brought their livestock to a pasture along the border.

According to Qadir, three other people were injured.
For the first time since Iranian shelling of the border areas began a few weeks ago, the US Embassy in Baghdad reacted to the incidents.
US Embassy spokesman David J. Ranz told Rudaw, “We have seen a number of contradictory reports and we continue to watch the situation. Iraq is a sovereign country and we expect its neighbors including Iran to respect its sovereignty and integrity.”
Iran claims to have seized PJAK camps and claimed dozens of PJAK casualties in recent weeks, but PJAK maintained that they have killed around 200 Iranian soldiers and lost 7 of their guerilla fighters.
In an interview with Rudaw last week, Sherzad Kamangar, a PJAK spokesperson said that members of the extremist group Ansar al-Islam, which is connected to Al-Qaeda and was based in Iraqi Kurdistan, have joined the Iranians in crossing the border. Most Ansar al-Islam fighters were killed or fled to Iran during US-Kurdish military assaults on Ansar al-Islam’s strongholds in 2003, but the group is still considered a threat to Iraqi Kurdistan’s security.

Dilamni, the high-ranking Peshmarga officer, confirmed that Ansar al-Islam fighters were involved in the clashes.
“The Ansar fighters guide the Iranians because they know the area’s geography well,” Dilmani said. “At the moment two units of Ansar fighters are with the Iranian soldiers. They are all Kurds from Qaladze, Sangasar, Taq Taq, Kifri and Kalar.”
Kamangar told Rudaw that PJAK fighters killed a high-ranking Iranian army commander named Abbas Asimi near the city of Sardasht on July 21 and also claimed that his group killed two other Iranian officers along with around 200 soldiers.
Iran’s Fars News Agency only confirmed the killing of Abbas Asimi and five of his soldiers.
William Anderson, professor of political science at Wright State University in Dayton Ohio believes that the Obama administration has taken a very soft approach toward Iran compared to the Bush administration.

“Since Obama came to power, the US policies towards Iran have changed,” Anderson told Rudaw. “His administration has branded PJAK as a terrorist organization; therefore, it is unlikely that Obama would say anything about the fight between PJAK and Iran.”
Some observers believe that Iran is shelling the Iraqi Kurdistan border to put pressure on the Kurdish authorities not to support extending the US troop presence in Iraq.
US Secretary of Defense Leon Panetta said during a visit to Baghdad earlier this month that Iran was supplying weapons used in attacks against US forces in Iraq ahead of the planned US troop withdrawal at the end of 2011.
Khalid Asadi, an Iraqi MP from the State of Law Coalition told Rudaw that Iran’s shelling along the border is unacceptable and any disputes should be solved through dialogue with Iraq. Asadi also said that Iran has legitimate reasons for using force in those areas.

“Iran says the PJAK fighters are launching attacks against it, which is true,” Asadi said. “So, Iraq must expel those groups that attack its neighbors from its territories.”
In a press conference on Monday Chris Bowers, British consul-general in Erbil, said that he is opposed to any country crossing the borders of another sovereign nation and bombarding it.
“We have also relayed this view to the Iranian government,” he said. “It is obvious that we are especially concerned about those villagers who have fled their areas under bombardment.”