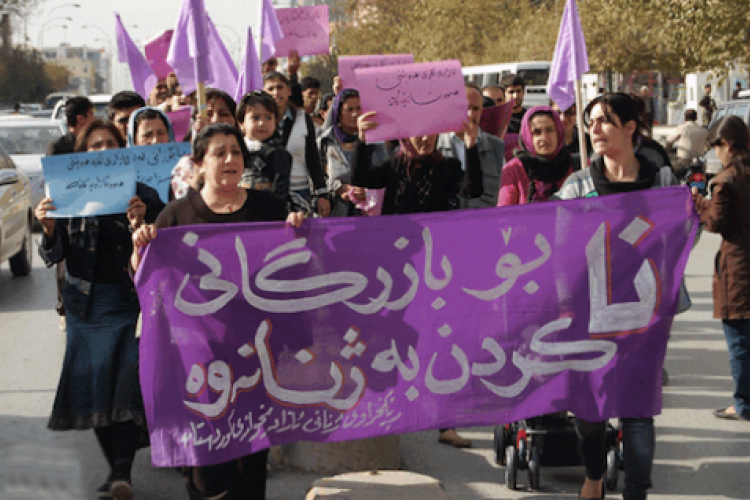 Rudaw.net, Iraqi Kurdistan -- Prostitution has become a hot topic of debate for legislators and activists in Iraqi Kurdistan, with some arguing that the sex trade should be legalized and regulated.
Chlura Hardi, a prominent civil society activist and director of Khatuzeen women’s center in Erbil, believes that Kurdistan’s openness to the outside world has caused prostitution to spread.
Nevertheless, Hardi maintains that banning prostitution is nearly impossible and argues that it should be regulated.
“Banning [prostitution] could worsen the issue,” Hardi said. “Other countries around the world have tried to stop it but it hasn’t worked.”
Hazha Suleyman, a member of the Kurdistan Region Parliament’s Women’s Rights Protection Committee, argues that prostitution has “become a well-known trend” in Iraqi Kurdistan and that brothels are commonplace. She agrees with Hardi that regulating prostitution is a better option than trying to prohibit it.
“Prohibiting prostitution has more disadvantages than advantages,” Suleyman said. “The Kurdish society is in a transitional stage and it is opening up to other countries in the world. Therefore we cannot prohibit prostitution now. It is better to draft a law that would regulate it.”
According to Suleyman, Kurdistan’s Parliament tried to amend its prostitution law, which is based on a federal law that criminalizes prostitution.
“We had four committees of specialists that prepared the project (amendments),” she said. “We wrote our reports but the legal committee rejected it.”
While prostitution is technically banned in Kurdistan under federal law, its legal status is murky because the law – like many others -- was passed during Saddam Hussein’s regime. MPs in Kurdistan have tried to pass new legislation since the fall of the regime in 2003 to ensure that laws and regulations are clear.
Last year, MPs from the Kurdistan Islamic League (Komal) proposed that any individual, office, company or organization that is involved in prostitution should be fined a minimum of 20 million Iraqi dinar ($15,000) and shut down for at least 6 months if the violation is repeated.
Kurdistan’s parliament reviewed the proposal but later rejected it in a close vote, arguing that prostitution was not widespread in the Kurdistan region.
Sabah Muhammad Barzinji, an MP and member of the Religious Affairs Committee in Kurdistan’s Parliament, believes that even if prostitution is not widespread, it should still be banned to prevent it from spreading.
“We support any law that would ban prostitution,” Barzinji said. “It is one of the enemies of the Kurdish nation that aims to disintegrate the social fabric and family values of the Kurdish society.”
Bahar Rafiq, director of Daldadan Women’s House in Erbil, told Rudaw that there is no evidence to prove that prostitution is rife in Iraqi Kurdistan.
“There is no data to prove that prostitution has become widespread,” she said. “But some of the media focuses on this issue more than before.”
Ashti Aziz, a member of Parliament’s Civil Affairs Committee, supported the Islamic League’s proposal, arguing that it contained measures to “impose punishment on the client as well as the prostitute. This doesn’t exist in the current Iraqi criminal law.”
Aziz, an MP with the liberal Change opposition movement, said, “No woman is born a prostitute.”
Bayan Ahmad Barwari, a member of the Parliamentary Committee for Social, Child and Family Affairs, believes that prostitution must be banned because “it is a threat that jeopardizes our national security.”
Barwari told Rudaw that any law regulating prostitution in Kurdistan would in essence legalize the sex trade.
“Regulating it is like legitimizing it. This is unacceptable in a Muslim-majority society. Also, our religion has its special place in our constitution,” she said, in reference to a constitutional clause that states that no law can contradict Islam.
However, Azad Jalal, a social worker, believes the rate of prostitution in Kurdistan is very low and maintained that prostitution does not pose any threat to the region.
“It shouldn’t be regulated or prohibited because these aren’t positive steps,” Jalal said. “Religious scholars, legal experts and social scientists must sit together to discuss this matter and find an appropriate solution for it.”