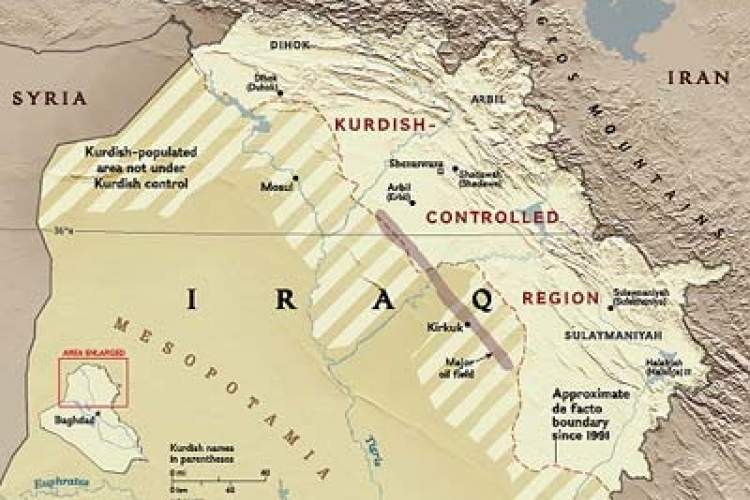 Masud Barzani, president of Kurdistan Regional Government (KRG), is in the habit of dangling from time to time the idea of independence for Kurdistan.

For example in an interview with Judith Miller in 2006 he insisted: “Having an independent state is the natural legitimate right of our people.”

In another interview with the BBC in January 2012 he stated: “I like the Kurdistan Region to evolve day by day. But what I really wish is to see an independent Kurdistan.”

The latest such example was during the celebrations of Nowruz, the Kurdish new year.

In his speech on March 21, 2012, he threatened by implication to declare independence for the Kurdish region if the political deadlock in Iraq continued.

He further insinuated that the oil-rich Kirkuk had to be incorporated into a future independent Kurdistan.

What is one to make of these declarations? Are they merely empty talks as his critics say, or trial balloons intended to prepare the ground for such an eventuality? In approaching the issue of independence Barzani is on a horn of a dilemma. On the one hand it seems that the Kurds are facing the best window of opportunity for such a move.

On the other hand, the formidable obstacles also seem to have gathered momentum.

The positive incentives have to do not only with the Arab Spring and the geopolitical changes that are taking place in the region as a result but also with the international community which appears more forthcoming regarding the modification of old maps and the formation of new states. This trend, which started in the 1990s with the establishment of new states on the debris of the Soviet Union, found its expression lately with the declarations of independence by South Sudan, Palestine and Azawad in Mali.

Barzani has also to reckon with pressure put to bear on him by the Kurdish people with regard to independence.

An informal referendum held in early 2005 showed that 95% of Kurds opted for independence.

However, Barzani’s critics blame him of missing earlier opportunities such as in 2003, of caring only for his post and the accumulation of riches and of lacking the courage to take such a step. Indeed, a possible internal Kurdish crisis is looming in the horizon if such demands are not fulfilled.

The ongoing crisis between the KRG and Baghdad could provide another incentive or excuse for such a move.

Barzani’s accusations that Prime Minister Nuri al-Maliki is leading Iraq to another dictatorship were accompanied by threats that if the political deadlock in Baghdad continued, Barzani would revert to the Kurdish people to ask their views on the next steps, namely declaring independence.

Interestingly, Ankara has kept its silence regarding such reports. Moreover, according to a report in the London-based Al-Hayat report, David Petraeus, director of the Central Intelligence Agency, has asked Ankara to support such a Kurdish move. Though this report seems far-fetched its very circulation is interesting.

Against this there are some daunting obstacles including the Kurds’ commitment in the Iraqi constitution to a federal state, the economic and political dependence on Baghdad, and the fear of antagonizing the neighboring states, especially Turkey which has become the KRG’s lifeline to the outside world and its most important economic and trade partner.

Another very important concern is the American stance.

Since the 2003 war the Kurds have become the US ally and the most credible partner in post-Saddam Iraq. But the maximum the American administration can accept at this stage is a viable federation in Iraq in which the Kurds would contribute to the stability of the state rather than open a Pandora’s box of secession.

Barzani’s strategy for solving such dilemmas is what one may call “creeping independence,” which means preparing the infrastructure on all possible levels for such eventuality and waiting for the opportune time for the declaration. This strategy was summed up lately by Barzani’s son Masrur, director of intelligence and security in the KRG, who in a way expressed the feelings of Kurdish youth: “Establishing a Kurdish state is a natural right.

The question is not whether or not we should declare the Kurdish state, it is rather how we can protect it. The first prerequisite is that our nation should be prepared to disregard its party and individual interests and to fight for their nation.

Whenever our people and the international conditions are ready, then it is a proper time to declare it. However, I believe better conditions and a brighter horizon have emerged for this.”

Examining the situation on the ground one can only repeat what every observer who visited the area testified to: Kurdistan has all the trappings of a state. In fact, in certain areas it seems even much more cohesive and developed than the Palestinian Authority or South Sudan.

On the symbolical level the most glaring manifestations are the Kurdish flag, the anthem, the use of the Kurdish language and discussions of the national narrative, especially with regard to the traumas of the chemical weapons and the genocide meted out to them by Saddam. On the practical level one should mention the Kurdish independent institutions such as the presidency, the parliament, the constitution and the army, (the Peshmerga); the flourishing economy; and the diplomatic ventures such as Kurdish representatives in foreign countries who function autonomously of the Iraqi missions.

Another unique situation is that there exist real borders between the Kurdish and Arab parts of the Iraqi state.

An important boost to the position of Kurdistan as an autonomous region was given by Masud Barzani’s weeklong visit to the US and his meeting with President Barack Obama, American officials, the business community and the media.

Indeed, the fact that Obama received him alone and not as part of an Iraqi delegation significantly boosted Barzani’s stature as a Kurdish national leader. It is also a far cry from the American-Kurdish relationship of only a decade ago when such a visit was conducted secretly and the Kurdish case as a whole was quite subdued in the US.

So the question now is not if the Kurds of Iraq declare independence but when. It seems that the timing depends mainly on relations with Baghdad.

If these continue to deteriorate, the Kurds might use this as an excuse to bolster their independent status. Also, further deterioration of relations between Turkey and its neighbors, Iran Syria and Iraq might encourage Ankara to turn a blind eye to such a Kurdish move. Finally, it seems that the younger generation is more likely to take such a bold step. In such scenarios the Kurds of Iraq might make the extra mile within years but not generations.

The writer is a professor at the Moshe Dayan Center for Middle East and African Studies. She is the author of the recently published book The Kurds of Iraq: Building a State within a State.
http://www.jpost.com/Opinion/Op-EdContributors/Article.aspx?id=267115